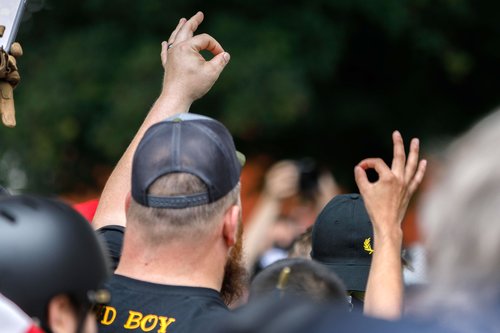 How can a symbol that everything is going well become a symbol of hate? ‘OK’ gesture has recently been added to the list of symbol of hate in the Anti-Defamation League, database that exposes the signals to educators and law enforcers. According to the Anti-Defamation League (ADL), a Jewish awareness organization, the symbol has been used as a meme for years and is associated with hate images, especially among white supremacists.

The use of this ring gesture where the thumb and pointing finger touch with the rest of the fingers extended can be traced back to BCE. Originally known as an expression of love, the gesture represented kissing lips in the Ancient Greece times. In the first century of Rome recorded as an indication that has been used in public speeches of the time such as openings, closings, and warnings.  In Buddhism, it was used as a sign of peace. It was not until the 19th century where the gesture was recognized as the letter ‘O’ and ‘K’ meaning “all is correct”.

In 2017, many users on 4Chan, an anonymous online messenger system, began a campaign of spreading the ‘OK’ gesture image across social media as a sign of white power and to receive attention from liberals. It was originally written in a thread that their purpose was to convince users of twitter that Neo-Nazis have opted the gesture. It was intended to be just a simple joke, but the amount of people associating the ‘OK’ image with images of hate has become the amount where it could no longer be written off as a joke any longer.

There were cases where the ‘OK’ gesture was used in killings. For instance, at Christ Church, New Zealand 51 worshipers were killed at mosques. The shooter was supposedly a white supremacist and flashed the gesture during the devastation. Less extreme cases were also reported but that doesn’t change the fact that they happened. In addition, one employee dressed as the character Gru at Universal Studios was fired due to taking a picture with a kid of color and, mimicking the gesture seamlessly. Political figures, such as Zina Bash,  supposedly did the gesture at Kavanaugh’s confirmation hearing. At a Chicago Cubs game, there was a fan who who was put on television who flashed the O.K. gesture. A Republican representative was caught using the gesture in a photo a year ago but claimed it was not for white supremacy but to show support for the 46th president of the United States, Donald Trump.

Surprisingly, this is not the 4Chans first attempt to make a innocent gesture into a gesture of hate. They attempted to spread the same message with everyday items, as well as the LGBTQ+ flag, although these attempts ultimately failed. However, what matters most is context because this gesture has, as well, been used among kids as called the “circle game”. Where they do the ‘OK’ gesture and put it below their waist. Being used more as a form of trolling than a form of hate.

Drastic changes in meanings for old symbols have occurred for centuries. Just as the swatzika originally meant “to be good”, but as time went on it became recognized as a sign of genocidal mania. The Okay gesture, as mentioned before, a sign that use to be an expression of love, just so happens to be the next victim in these trends we surround ourselves with.