An Insight into Captain Wolf’s Life 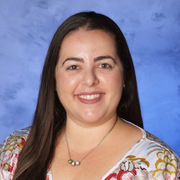 Mrs. Melissa Wolf: a teacher, a mother, a book lover, and a Johnny Depp fanatic.

She tells how she leads “two different lives”, one as a teacher from 7:00 a.m. to 2:20 p.m., and one as a mother after school, both of which are two very important roles in her life. Wolf comes from a big family that is very tight-knit since she has 3 children of her own, as well as many cousins, nieces, and nephews. Mrs. Wolf, who’s students know her as Captain Wolf is an IB/AP Language and Literature teacher at John A. Ferguson Senior High. Wolf has been teaching at Ferguson Senior High for 14 years, which is where she started her career and will most likely complete it.

As a young child, Wolf was unsure about what she wanted to pursue in the future, but she did know she loved to read and analyze literature. It was not until she reached her junior year of high school and took AP English Language with a teacher by the name of Mrs. Borum, who she considered to be her inspiration and a driving factor for her decision to become a teacher. “She was so knowledgeable and I remember having that epiphany sitting in her class saying that’s who I want to be when I grow up,” said Wolf.

Wolf went to Florida International University (FIU) to attain her Bachelor’s degree and later her Masters in English and Education. Wolf enjoyed her first four years in college and was loving all her English classes; she was definitely reassured that’s what she wanted to do.

Later on, in 2005, she started her career as a teacher at Ferguson Senior High. She always knew she wanted to teach high school students because she believed she didn’t have the patience to teach younger children nor deal with the “hormones and the drama” that comes with middle school students.

The first two weeks were very stressful for her, she didn’t know what she had put herself into. She would always go home, cry, and dread going back to work the next morning.

“I realized you can only do so much, that you are not going to make changes for everybody, and you can’t save everyone either,” Wolf said, believing she was failing at her position as a teacher. This experience led her to pursue her Masters in English and Education at FIU.

When January came along, she changed her perspective on what she was doing, she still didn’t love the job, but it was “bearable.”

At the end of her first year as a teacher, Mrs. Graham, the head of the department, offered her a spot as an IB English teacher, which was truly a blessing in disguise. Before the offer, Wolf had considered leaving the profession and even started researching about what else she can do with her degree.

Once Wolf became an IB teacher, she loved her job ever since. That was when she embodied the type of teacher she truly was. Wolf was excited to teach the IB curriculum, be able to act out the books to her students and analyze every detail of a story.

The name Captain Wolf came from the deep love she has for Johnny Depp, but more specifically his portrayal of Captain Jack Sparrow. “When the movie first came out, I loved it,” Wolf said, it was during her second-year teaching IB when her students started calling her Captain and ever since it just stuck. Wolf has been introducing herself to new students as Captain since 2008.

For some perspective, Wolf’s classroom is decked out in pirate-themed decorations and as you enter her classroom, there’s an enormous draping of Johnny Depp as Captain Sparrow on the wall to the left. Many of her students believe that her decorations add character and a light-hearted feeling to the class, and a bit of humor when she talks about Depp throughout her lessons.

Wolf always knew she wanted to have children and just keep the legacy going by having such a close family no matter how many miles away. She grew up with two younger brothers and five cousins, their close, tight-knit relationship, made her childhood extremely memorable.

Almost every year, her family goes to Massachusetts to visit other family members, so that her children can also experience having that close bond with their cousins even if they live so far away. Bringing all her family together, including her husband’s side of the family, is really important to her and is something that she makes an extra effort for every year no matter what. Wolf is already preplanning her road trip all the way to Massachusetts for next year, even if she cannot be with them all the time, she still maintains the communication with her cousins and siblings via social media.

Wolf always has a great time in Massachusetts, but it’s not the only thing she does to bond with her family. Wolf, her husband, and her children have frequent trips to Disney World as well. She enjoys watching her kids being happy as they meet Mickey. She also loves “the extent the company does to, to make you feel like you are special,” Wolf said.

Wolf isn’t a big traveler, now that she has children, so it just mostly consists of Orlando and Massachusetts, but her dream is to visit Scotland once her children are older and her husband have “crossed the pond.”

Her dream to visit Scotland started in eighth grade when she read a book that took place in Scotland. “I fell in love with the culture of it and the quilts, the castles, and the romance,” Wolf said. Family and happiness are what she strives for her life to consist of.

A student’s education throughout their life can teach them many things about their future and the person they truly are, and that is why teachers are so important to our world.

Captain Wolf’s advice to students is “They [students] need to understand that life in itself is unfair, but it has the beauty of being individually created without the stressors of it…they need to realize that’s just an aspect of life.” Teaching is a massive part of Wolf’s life as she strives to inspire, motivate, and educate students to continue to work hard.