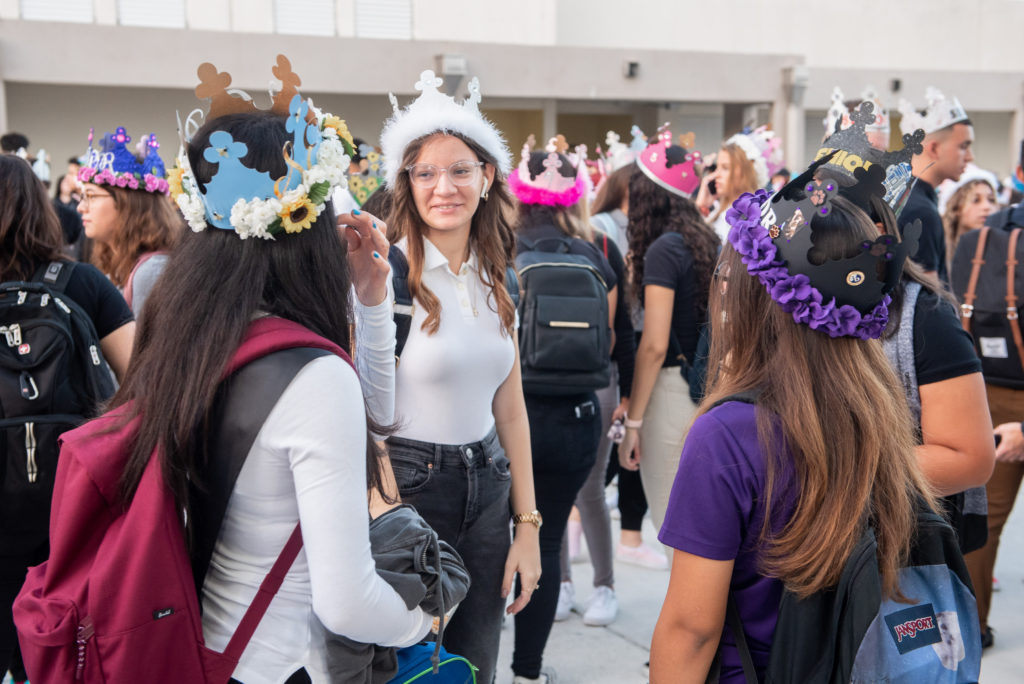 A new tradition has been developed at John A. Ferguson Senior High School for Seniors, which is known as the Senior Crown Contest. In previous years, each senior would design their own crowns as they wished, so that they could wear them for the first week of school after summer vacation. Yet, the Senior Board has come up with a new idea as a group to make Seniors more excited for the new school year by making this custom into a competition among Seniors.

People were notified about the Senior Crown Contest through the Ferguson Class Page of 2020 on Instagram. The students who were interested in participating in the competition had until Friday, August 23rd at midnight to submit it through an application known as Cluster. Additionally, there are five various categories for the contest which include DIY King, DIY Queen, Most Creative, Most Artistic, and Falcons Choice.

Thus, the crowns that best fit the criteria for a certain section would receive a graduation ticket. The students who are members of the Senior Board have put in much effort into choosing the winners, but for the category, Falcon’s Choice, the Administration needs to choose a crown.

Once the winners are announced through Instagram along with a visual of their crown, they should go to room 50, which is the Activities Office, in order to receive a certificate. Then, by the end of the school year, the Seniors must turn in the certificate they have previously received, so that they can get the graduation ticket they won.

The Marketing Manager of the Senior Board, Paulandrea Masso, mentions that “When I was a sophomore, I was being interviewed to be in the Junior Board for Historian. The description of Historian was the person who keeps all the pictures and memories, like the person who just perceives all of the class’ history.” Hence, Paulandrea decided to do some of her own research in order to prepare herself for the position which led to the discovery of Cluster.

The application was first used as a collection of pictures and videos in which any student at John A. Ferguson Senior High School had access to and they could upload multiple images in order to conserve all memories that students had throughout their years at high school. Therefore, a Freshman can submit several records of their favorite moments throughout their years at high school, and once they are seniors, they can look over all the events they participated in and recall all the good times they shared with their Falcon family.

The Secretary of the Senior Board, Melanie Amador, says that “We had a lot of summer meetings so we were just trying to think of ideas of how like even before the school year started how we can get people really peeped for senior year and ready for all the activities and like how do we kick off the year like that.” Overall many Seniors were eager about the Senior Crown Contest which led to some people creating two crowns, which is the maximum that can be turned in, that can give them a higher chance of winning the graduation ticket.

Alejandra Correa, a senior at John A. Ferguson said that “I did two different color schemes and a theme for each one, one of them was like all black and gold themed as in like Film and Performance, because I do Theater and TV Production. The other one was more related to the career I want to do which is Law.”

The main goal of the Senior Crown Competition was to encourage seniors to be more school-spirited. Consequently, the Senior Crown Contest was a phenomenal way to begin the school year, because people got the opportunity to compete with their classmates while simultaneously revealing their artistic side.