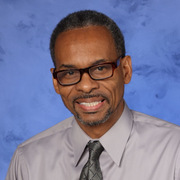 When you step into Mr. Rowe’s English class, you automatically feel the welcoming energy. Robert Rowe, a teacher in the English department, makes it a goal of his to motivate and empower young minds to reach their full potential, both in and out of the classroom. His dedication and love for his students is uncanny.

As a young man in middle school, Rowe’s life turned upside down when he had a spectacular language arts teacher. Mrs. Humphrey was kind, challenged him, and was willing to communicate with him at an individual level. This sparked his eventual love of teaching. He felt inspired and motivated to one day have this impact on his own students. Now that young man, who was taught to teach by example, is now one of the most loved English teachers here at Ferguson.

Rowe’s ambition to get up every morning is driven by his love of teaching and working with his students. For him, the look on their face when they feel empowered by the knowledge gained in his class is worth every early morning and late night. Mr. Rowe truly wishes the best for his students and in his class, he loves to push his students to do better. In fact, his ideal school day would be giving a test on a Friday that all his students passed.

“Knowing that they were pushed and performed well and they did this [take a test] on a Friday. Then on Saturday, once I’m home relaxing with my family, I think and reflect about that. The feeling that I prepared them well enough to be at their best,” said Mr. Rowe.

Mr. Rowe gives his all to Ferguson and his students have taken notice. Emily Perez, Ferguson sophomore, said “[Mr. Rowe] is a very fun teacher but he’s also very engaged in our learning and likes to know what we think about what we do in class.”

Rowe is more than just a caring English teacher, he’s also a spectacular basketball player. He has played the sport all his life and even played in college at Stetson University and FIU. At different points in his life, he served as an assistant coach at Ferguson for both our girls and boys basketball teams, the head basketball coach at two other high schools (Miami Edison and Miami Jackson Senior High), and the JV coach at Miami Norland Senior High.

Mr. Rowe’s proudest accomplishment was when he signed a scholarship to play basketball in college. He still remembers the day he promised himself at 12 years old that he will one day earn an athletic scholarship. His love of the sport never ceased and to this day he trains his sons in his free time.

Despite his extensive coaching experience, when it came time to decide what to teach, he chose language arts. Rowe had the opportunity to teach P.E. at an elementary school but decided against it.

“I didn’t want to be generalized or stereotyped because a lot of males are physical education teachers so I thought, you know, I want to try and put my efforts towards teaching English,” he said. He has never regretted this decision, as it forces him to consistently work harder and read deeper into literature to find individual meaning.

Mr. Rowe is proud of his Master’s in Educational Leadership from Nova Southeastern. In fact, his educational accomplishments led him to meet his wife at a school workshop.

Rowe’s life has been impacted greatly by both of his parents, who taught him respect and guided him throughout his life. Mr. Rowe feels inspired by his father, who passed away when Rowe was in college, and by his sister, who battles sickle cell anemia and is one of his biggest heroes to date. These experiences have made him a more compassionate, understanding teacher and he is an invaluable contribution to Ferguson.

Mr. Rowe’s advice to all high school students is to put forth effort whether you’re an IB student or a ‘C’ student, the goal is to simply try and stay focused.