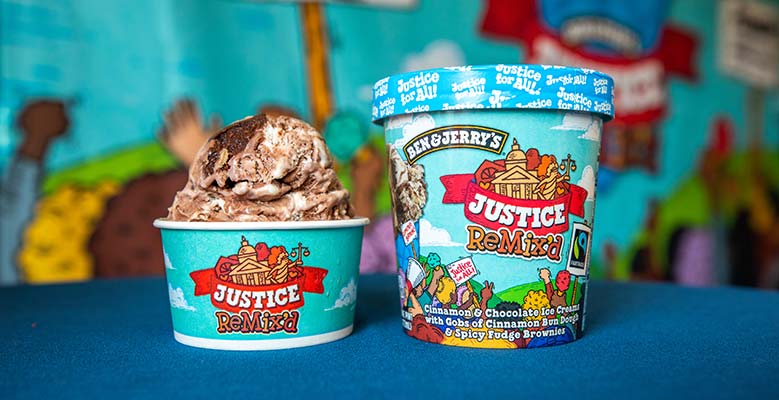 The well-known Ben and Jerry’s Ice Cream has revealed a new flavor called ‘Justice ReMix’d’ on September 3rd in Washington D.C. during a press conference to advocate for criminal justice reform. Justice Remix’d is described as a chocolate and cinnamon ice cream with a lump of cinnamon bun dough and spicy fudge brownie pieces.

Throughout the past few decades, the criminal justice system has been considered broken due to the wealthy, often white individuals, receiving more benefits compared to minorities. Therefore, it is more likely for a black person to be sent to jail than a white one due to the racism conveyed in society. Some people argue that the police officers are not doing their job as they are expected to; meanwhile others believe that society itself is broken not the police department. The United States is known as “the land of the free”, where everyone has the same natural rights which cannot be taken away from them, but the criminal justice system shows otherwise.

The co-founders of the Ice Cream company, Ben Cohen and Jerry Greenfield, are working alongside the Advancement Project National Office (APNO), a multi-racial group who fights for civil rights. A portion of the money earned by the product, Justice ReMix’d ice cream, will be given to this civil rights group. Hence, the main goal is to fight for justice for everyone, meaning liberty should not be dependent on a person’s race, ethnicity or social ranking. Moreover, money that is funded by the ice cream will be used to invest in equality rather than the making of more prisons or placement of more police officers on duty.

The original plan was to introduce the Justice ReMix’d ice cream in Miami, Florida, but Hurricane Dorian influenced the Ben and Jerry’s location of announcement for their newest ice cream. Thus, Justice ReMix’d was presented to the public in the nation’s capital, Washington D.C. Additionally, the Executive Director of the Advancement Project National Office, Judith Browne Dianis was present at the conference in order to share with the crowd the importance of improving communities who are facing discrimination. After that, Ben and Jerry prepared scoops of ice cream for everyone, so that they savor the ice cream while listening to background music playing.

Consequently, it does not take much effort for individuals to become a part of the movement that is dedicated to ending the broken criminal justice system. If you want to order your own pint of Justice ReMix’d, they can be found here: https://store.benjerry.com/justice-remixd-ice-cream-pint-available-now/ or at a store near you!