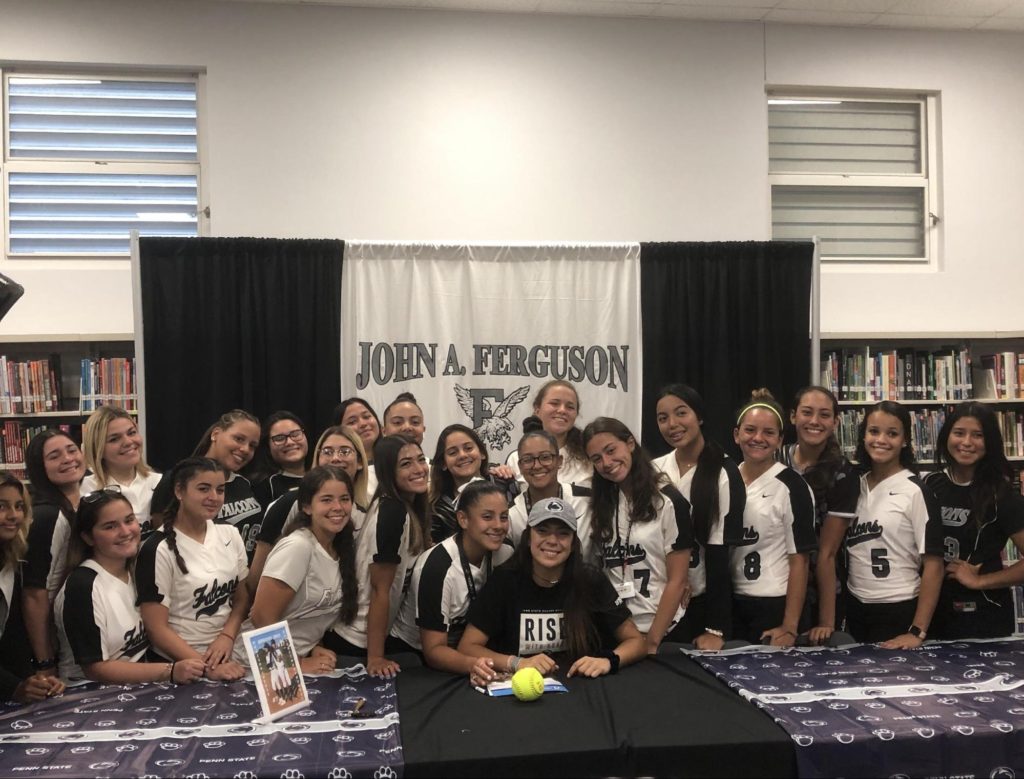 On April 9, 2019, a senior at John A. Ferguson Senior High known as Valentina Sandoval had a minor reunion with her family and friends as well as other individuals who have guided her along the way which led her to receive a scholarship from Penn State University. The scholarship that this student has received will be paying for thirty-five percent of what she needs for college, therefore she and her family would only be paying nine grand from a 35 grand tuition.

The softball coach is extremely focused on the players putting in the hours. When an individual is dedicated to improving themselves in a certain sport, they should be able to excel in this area. Hence, after years of playing softball, which is the sport that Valentina has a passion for, she began to become a better player. Work ethic is the main component in any sport because if an individual shows interest in continuing to work hard in order to see results, they will eventually reach their goals.

Valentina has been playing softball ever since she was in seventh grade, but she was not the best player, but she showed determination and patience. Since Valentina has demonstrated a commitment to the sport, she has achieved many of her objectives. Valentina provides reasons for her receiving a scholarship by explaining that “I definitely worked hard and I had people that were included in my success, like my coaches, my parents. All of them are just a big part of why I am able to say that and commit to Penn State University.” Although Valentina would sometimes struggle, she would continue to go to softball practice in order to overcome those obstacles that she encountered herself with.

Although Valentina has become a better player over time, she also considers sportsmanship a major role in softball as well as in any other sport. Valentina mentions that “Sportsmanship means a lot to me, and it is the one thing that we must always show while playing even if we are having a bad day, even if we are off, we must always connect as one and make sure that we bring the energy that we need while playing on the field.” Therefore, although Valentina and her teammates would lose several games, they would still treat the other team fairly and with respect.

Since Valentina Sandoval has just accomplished one of her main goals, although it took much time for her to get to where she currently is at, she would like to now focus on other goals she has set for herself. She claims that “I want to study psychology and I want to go into childhood coaching to help kids in the future with nursing or anything like that which would benefit them.” It is extremely significant for someone to set goals for themselves because it would make it easier for them to stay on that track.