Spider-Man: No Way Home: The Biggest Superhero Movie to Hit the Box Office 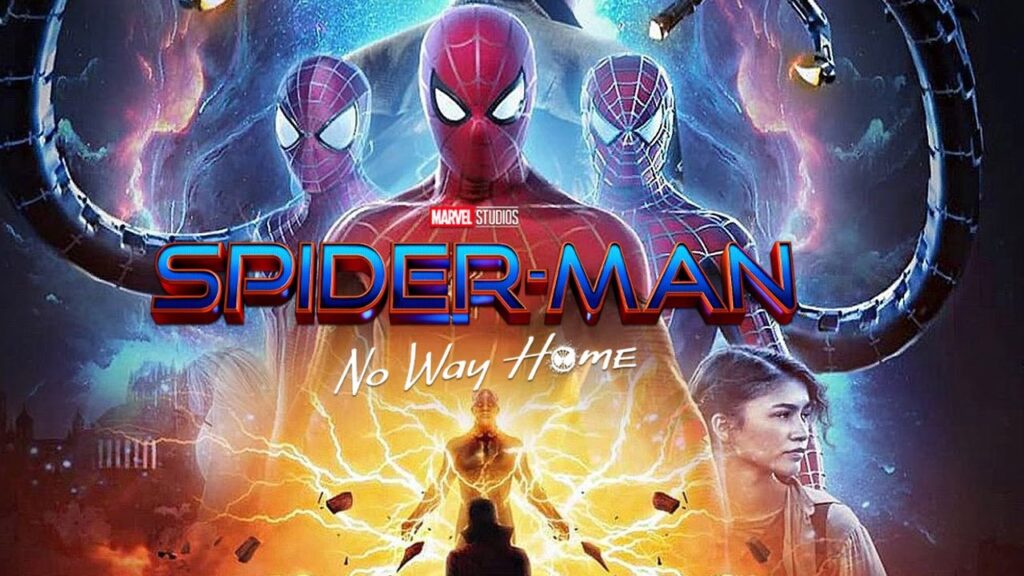 On December 17th, 2021, Marvel fans everywhere suited up to watch the highly anticipated film, Spider-Man: No Way Home, directed by Jon Watts and Columbia Picture. Since the movie’s announcement, the anticipation surrounding it was historically high, but after the trailer was released, and the rumors of returning Spidermen started to fluctuate in the media. the already palpable excitement grew.

The film starts just as Spider-Man: Far From Home ends, with the reveal that Peter Parker is Spider-Man.

Peter and his friends’ lives got turned upside down post-reveal. With the last straw being him, Ned, and MJ getting rejected from all of the colleges they applied to, Peter takes matters into his own hands.

He goes to MCU’s resident wizard Doctor Strange to help, but in a spell gone wrong, Strange accidentally rips the multiverse open, and supervillains from alternate universes are out for Peter’s blood.

Thus opening up a void to showcase fans to many many familiar faces: Willem Dafoe, Alfred Molina, and Thomas Haden reprised their roles as Green Goblin, Doc Ock, and Sandman, respectively, from the Tobey Maguire Spider-Man films, while Jamie Foxx and Rhys Ifans from Andrew Garfield’s movies returned to their roles as Electro and The Lizard.

After Tom Holland’s Peter Parker is sent on the task to find the alternate universe villains and bring them back to Strange, he realizes with the help of Aunt May that he could try to save them instead of sending the villains back to their universe to die. When the villains understand what’s happened, they go rogue, and after a showdown between Green Goblin and Holland’s Spider-Man, Aunt May tragically dies, and he abandons his goal to cure Green Goblin.

It is then that all of the anticipations come to a high when along with their villains, Andrew Garfield and Tobey Maguire reprise their roles as Peter Parker along with Tom Holland in the multiversal event where three generations of Spider-Man characters come together.

Tom Holland and Zendaya, who keep the trend of Peter Parker’s dating their love interests both on and off-screen going, have fantastic chemistry. Jacob Batalon, who plays their best friend in the movies, completes a perfectly effortless and relatable dynamic. The three Spider-Man’s interacting with each other is hilarious. Between each of their individually unique renditions of Peter and their light banter, it added another layer of fun to an, at its core, serious movie.

All these events culminated in a final battle on the Statue of Liberty between the three generations of Spider-Men and their villains. Holland’s Spider-Man cures the villains that Garfield and Maguire’s Spider-Men could not. In addition, Andrew Garfield’s Spider-Man saves MJ from falling to her death in an emotional callback to him failing to to save his love interest, Gwen Stacy, after she falls to her death because of the Green Goblin. Finally, in one final battle scene, the first Spider-Man prevents the most current one from succumbing to the claws of revenge and killing Green Goblin.

As Strange gets ready to send those from alternate universes home, the multiverse starts tearing at the seams. The only way to save it is for people to forget Spider-Man’s identity and Peter Parker himself.

In a monumental sacrifice, Peter Parker becomes a ghost, and everyone forgets him; his friends, allies, enemies all forget Peter Parker’s existence. Spider-Man: No Way Home ends with everyone returning to the universe they belong to, a heartbreaking goodbye between Peter, MJ, and Ned, and a more hopeful scene of Peter starting over in a small apartment, a box with a GED book, and Peter Parker making a new Spidey suit, ready to do what Spider-Man has always done, be the friendly neighborhood Spider-Man.

While I have not been a fan of MCU’s Spider-Man, I know that after this movie, that has changed. None of the previous films have felt like Spider-Man movies. In Captain America: Civil War, Spider-Man’s role was more of a side character than anything. In Spider-Man: Homecoming, the first of Spidey’s solo movies with the MCU, it felt more like an Iron Man movie than a Spider-Man one. I had the same issue with Far From Home; the movie felt like an epilogue to Endgame and not a Spider-Man one.

If you think of the three MCU Spider-Man movies, you can view it as a coming-of-age story. We have a young Spider-Man starting out relatively green around the ears, trying to figure out how to be Spider-Man with the help of Tony Stark and Happy Hogan. On the other hand, in No Way Home, he has neither of their guiding hands to tell him what to do. Spider-Man has finally “come of age” in this movie; he’s the one calling the shots, making the sacrifices, and dealing with the consequences.

As in this movie Tom Holland finally received his Peter Parker storyline, and after receiving the infamous mantra of “with great effort comes great responsibility” he battles through tragedy and hardships to those closest to him, and starts to realize the detrimental effects that be inflicted on him.

The film included two credit scenes. The mid-credit scene shows Eddie Brock, otherwise known as Venom, in a bar in the MCU rather than the other universe that Venom takes place in, where the Avengers don’t exist, learning about the Avengers and Thanos. As Eddie decides to look for Spider-Man in New York, he is suddenly transported to what is seemingly their universe. In the post-credit scene, we see a teaser to Doctor Strange: Multiverse of Madness, in which he turns to Wanda Maximoff, who is currently living in isolation after the events of WandaVision, for help.

Spider-Man: No Way Home received a 94% on Rotten Tomatoes and skyrocketed through the box office with a whopping $1.218 billion, entering the list of the top ten highest-grossing films of all time.

After watching the movie, it’s understandable. Spider-Man has always been a fan-favorite Marvel character, and Tom Holland’s rendition is no exception. In No Way Home’s multiversal event, the meeting of all three Spider-Men is something that appeals to many.

In November of 2021, Amy Pascal, Sony executive, had assured that three more MCU Spider-Man movies were planned, but after an interview between Tom Holland and People, that might not be true.

Furthermore, he expressed that it may be time for there to be an end to Spider-Man after he, Garfield, and Maguire have all played the role.

“I would love to see a future of Spider-Man that’s more diverse — maybe you have a Spider-Gwen or a Spider-Woman.”

If this is truly the end of another era in Spiderman’s illustrious history on the big screen, then Tom Holland’s series can be considered more than a success. Surpassing expectations and boundaries fans could unanimously agree would never be attainable, Tom Holland’s Spider Man fully integrated with the MCU interacting with a variety of classic heroes and villains, while also being allowed to hone possibly the most in depth story with an iconic payoff satisfied any possible checkpoints of any super movie hero series.