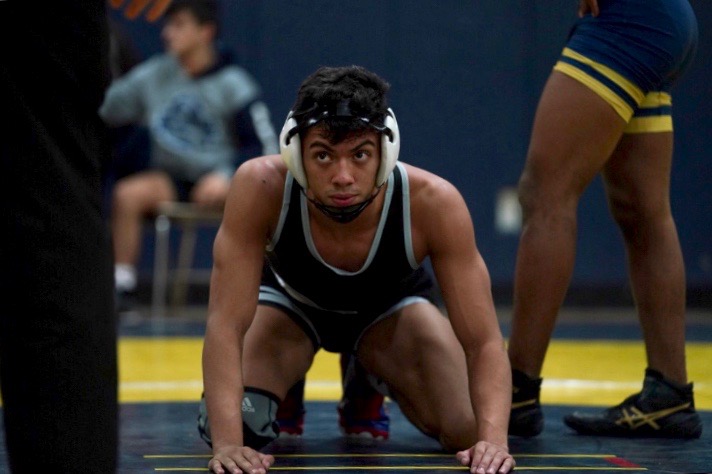 The Wrestling State Championships was an incredible day, not only for Ferguson but for one wrestler who has seemed to transcend to greater heights… On Friday, March 8th, Fredy Rizo became the first Ferguson wrestler to make it to the semifinals.

Believe it or not, Rizo’s mind was not always set on wrestling. “I started wrestling because I was really bad at soccer.” After having a talk with the soccer coach about his future in sports, Rizo started to like the idea of wrestling. “The soccer coach said, ‘Hey, my friend is a wrestling coach’ and I thought to try it out. It was my sixth-grade year, so I thought it was like WWE, but I saw it and it was nothing like WWE, and I just fell in love with it ever since.”

As Rizo’s love for wrestling grew, so did his devotion.“I started off as being a really average wrestler, and I really committed to the sport, I committed and gave them my 100 percent. Once I started giving 100 percent, I started to see a bunch of wins, and I just became amazing. Time flew by, and I’m the most dedicated wrestler and the most decorated wrestler in Ferguson history.” Having the vigor and enthusiasm to accomplish the things that Rizo has says much about his steadfastness in what he has faith in.

In many ways, Rizo’s commitment has no doubt inspired his teammates as he had done in his endeavors. Teammate Nery Caceres remarks, “Him being the captain of the team, he has a lot of leadership, he sets a good example for everybody else, he’s the representation for the team. When things get tough, he knows what to do.” On several accounts, Rizo’s hard work has most definitely paid off.

Once Rizo decided he wanted wrestling to be a big part of his life, his focus and persistence helped him as he started to make more time for his sport. “There are days that I’ve sacrificed. Like, let’s say I have a party or a special event, and I couldn’t go because I had a tournament or had to prepare for a tournament. Those days get really stuck in my mind because it drives me to go forward. Whenever I’m feeling down, I think ‘I missed this for this moment. So, let me embrace this moment’,” Rizo stated. But not all of the wrestler’s challenges were won over by just a tough mindset. Throughout the years, Rizo has had multiple injuries such as a ‘nagging knee’, a shoulder injury during the State Championships, as well as, having to cut off weight to fit into his weight class. His sheer determination had unquestionably pulled him through these obstacles to become what he is today.

One of his main motivators, Rizo said, was his family. “Giving them the medals or giving them whatever accomplishments I have, they get really proud of it, and really happy. So, seeing their reactions make me work hard every day.” If you have a driving force to latch onto, it can help you focus on what goals you would like to reach, and how you can attain them.

Rizo’s family was ecstatic to watch him qualify for the semifinals, he explained. “My family was really proud. They saw me in the newspaper and started crying. I was in the Miami Herald, and they saw that and got really emotional.” When going through significant achievements in life, it is important to have family there to support, care, and give love when it is most needed. Fredy Rizo is lucky to have that in his life.

This falcon is paving his way in the Ferguson history books, as well as into his bright and shiny future. Fredy Rizo has absolutely succeeded in his goals for the first day of state championships, and without much preamble, this wrestler will certainly do big and better things in the future.