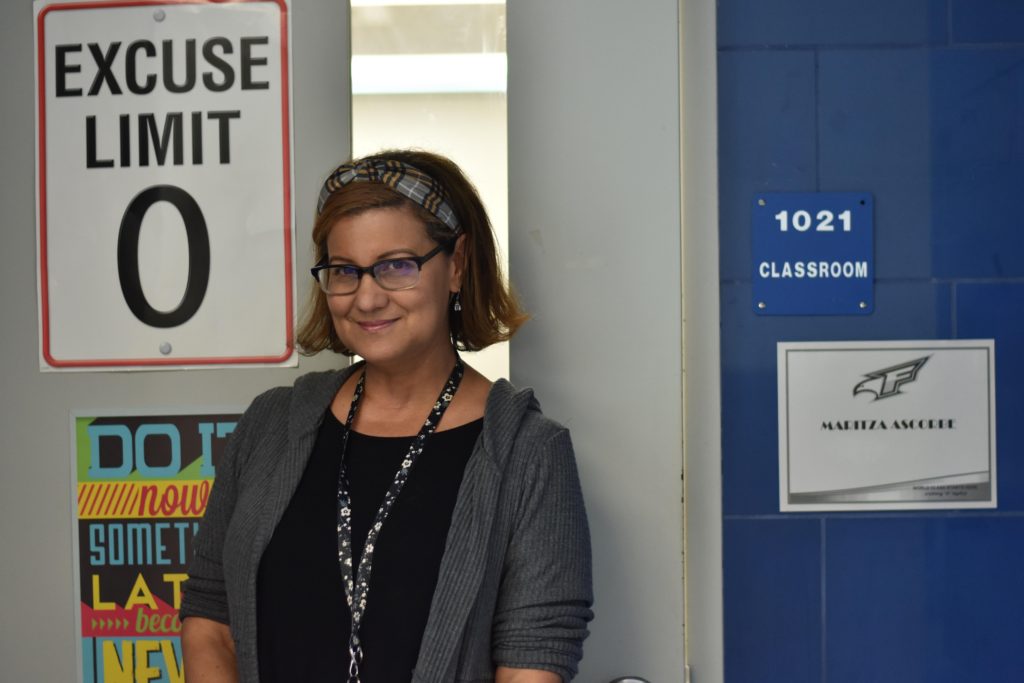 Mrs. Ascorbe is one of Ferguson’s most beloved teachers. She teaches only seniors, taking on  English 4 Regular, Honors, Gifted and AP English Literature. Right from the Ferguson website she states, “I love what I do—and I love my students more”. This can be seen when speaking to her. Some students of hers feel that she is understanding and effective in her teaching. That when she teaches, she truly shows that she loves what she does. Telling relatable stories with the lessons so they can have a better understanding, bringing ease to what would be a difficult course.

Before becoming one of Ferguson’s most charismatic teachers, there is a backstory to this amazing educator. Born in Panama she worked at an office in military intelligence, right before meeting her husband as a senior in college. She followed him through his military career being stationed at different locations. They did this for many years. When they were stationed in Puerto Rico, she decided to go to graduate school and received a masters in English. The thought of becoming a teacher didn’t cross her mind until then. In fact, her original choice as a career was to become an attorney. When they received the orders to go to Miami in the year 2000, she became a teacher while her husband was a commander in UM and FIU ROTC.

When speaking of her favorite moments as a teacher, she automatically responded that she had countless moments that she loved. However, although it may sound a bit odd, her favorite is after graduation, when her students are now her former students and end up becoming her friends. She enjoys learning about their career, their life, and relationships. Yet, she does very much love the environment of a classroom and stated, “I absolutely love my students… They are the reason why I do what I do.” When saying this, her voice carried the genuine love she has for her students.

Ascorbe loves to travel and if she could, she would do it much more. When asked what was at the top of her traveling list, she mentioned Japan but where she would truly enjoy visiting is Europe, having been there already 5 times she still feels that Europe has so much to see and offer. When she was younger, she would live at different parts of Central and South America and the Carribean Islands because her parents were Diplomats. She lived in locations such as Argentina and Jamaica. She has traveled, as well, around South America. However, from all this she would love to travel to Europe much more, even to stay for a couple of months. She is now also quite involved in her church being a practicing catholic.  She has been married to her husband, now a retired colonel and an assistant principal at the catholic school that their daughter attended, for 34 years and is blessed to be with him to this day. She has two daughters one an attorney and a victim’s advocate, both working on helping those in need.