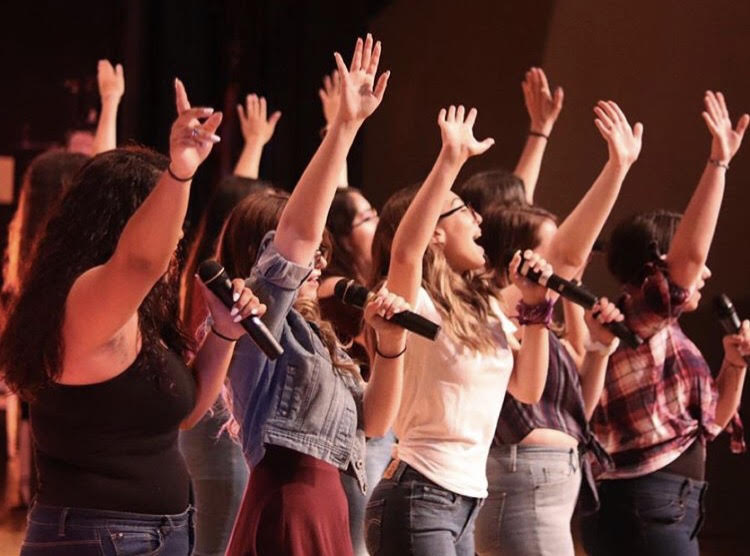 On May 3, 2019, the John A. Ferguson choirs organized a special performance in the auditorium from 7:00 pm to 9:00 pm. for students and any family members who were willing to attend. The choir teacher, Ms. Perez, and her current students have taken a major role in the occurrence of this show.

The choir show began with group singers as well as one person who is directing the musicians with a variety of gestures in their choral conducting. Additionally, there were different people who specialized more in instruments, so some individuals played the piano, electrical guitar, or hand drums. The musical talent of each adolescent was expressed in this unique performance. Senior Savannah Gonzalez briefly stated that, “I thought the show was going to be great, and I was a big part in planning it like we have a chorus Board of Directors and I am the Activities Director, so this is a big event we do and we planned it thoroughly so I knew everything was going to be fine if we stuck to the plan.”

Choir teacher Ms. Karen Perez mentions one of her main goals which was to “Fill up all the seats in the auditorium and we were successful in that due to big campaigns, posting on Instagram, advertising, and putting up posters.” Moreover, Ms. Perez considers the performance that her students and herself arranged a success, due to the reason that although the show lasted two hours, no one seemed bothered by this, because they were entertained. Alondra Monzon who is currently a senior at John A. Ferguson and a member of two elite choirs states that “I thought it was going to be a good show. I mean I was nervous because about two years ago, there was a concert where not a lot of people went, so we were kind of down, since we wanted to see a full house, but this year we packed the auditorium all the way to the second floor, and it was really fun.”

Other performers had a different perspective on the show that they participated in. Thus, the majority of the teenagers in the choir group just wanted to enjoy themselves by singing their hearts out and share their musical talent with those in the audience. Hence, freshman Sophia Alegre who has just become a part of the chorus program mentions that she just wanted to spend time with her friends and enjoy this new once in a lifetime experience. Alondra Monzon states that “The purpose of the show was just to have fun, mainly since I am a senior and it is the last one, and I really wanted to enjoy it.”

The students within the chorus group have also been looking forward to having people gain interest in their group so that they can grow and increase in size. Therefore, the choir concert has encouraged and inspired some people to join the choir program, after the audience has seen how exciting the concert was for both the performers and those watching. Since the majority of the people who participated in the show were seniors, this will be the last time they will be performing with their friends, which they have grown such strong bonds with after spending many moments together. Consequently, the chorus teacher is searching for new students who have an interest in joining her program in order to continue the legacy that the current seniors are leaving behind at John A. Ferguson Senior High School.

Every year Ms. Perez and her students dedicate themselves to making improvements to the choir program so that their shows can become more well known within the school. It is obvious that this school year the performers gave it their all, making this one of the best shows that the audience has seen. Most people do not believe there is any way to make the show any better than what it already was, yet some individuals have some minor ideas in mind. For example, student conductor Savannah Gonzalez believes that “If more people were added, then this would lead to a bigger production.” Meanwhile, Alondra Monzon strongly believes that people from a cappella groups should be more confident in themselves because it provides the audience with more positive vibes. Plus, Ms. Perez claims that she does not really have any improvements she would like to make to the concert, but she is willing to do another concert in the next school year, in which they will do a “throwback” performance so that a variety of music is featured from different eras in order to change the theme of the show.

Every school year there are two different choir shows that take place, yet this one, in particular, is extremely sentimental to multiple people. Since most of the performers are seniors, this is the last show they will be part of. Giselle Martinez states that “It is a bitter-sweet moment. I feel a little sad because I am not going to go through this process anymore or be with these people that I have performed with for years, but I am also happy with the way it turned out.”