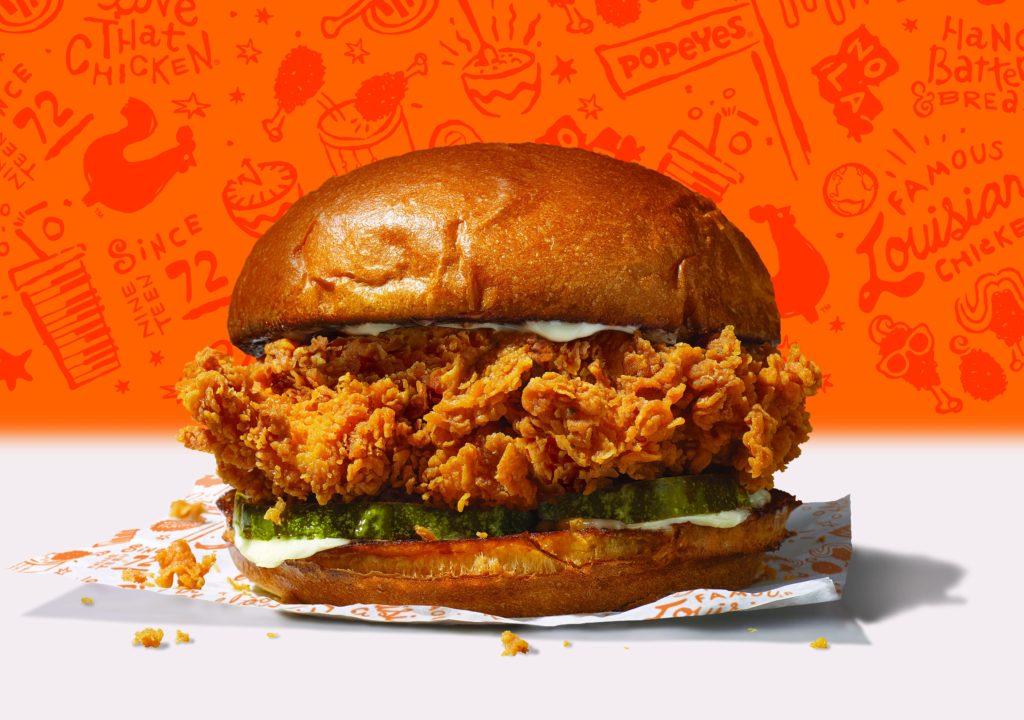 When Popeyes Chicken Sandwich was originally released in August of 2019, consumers went crazy for it, causing the sandwich to sell out in merely a few days. Along with the regular sandwich there was a spicy option made available to customers. This release was so big it outshined all its competitors. To feed those hungry for more the sandwich was re-released on November 3rd, 2019. It was trending again, bigger than before, and other chains were trying to find ways to replicate it but were largely unsuccessful. Due to the power of social media and the sandwich’s impact I was able to try this mouth-watering creation. I think I speak collectively for those of us who have tried this sandwich in extending my thanks to Popeyes for their contribution to fast food.

Automatically, the first thing I noticed was how nicely packaged the sandwich was, wrapped around a paper and encased in a aluminum bag to retain the heat. As I opened the packaging it gave off a well-fried, spicy aroma. The first thing I noticed was the wrapping size was larger than average. At first glance, it was already looking quite enticing. The buns were soft and had a lovely bronze color. It was quite visible how copiously buttered they were. The chicken had quite a golden crisp that added a bit of contrast which worked incredibly well. Based on the large size, you could see that the sandwich was generous with its amount of chicken and there was visibly a hint of the spicy sauce dripping down the side.

Because of the large size, I didn’t exactly know where to start. Just by grabbing it, the sandwich was quite soft. My first thought during this bite went to the iconic ingredient of all Popeyes’ sandwiches: the pickle. It definitely momentarily overpowered the other flavors. This is a matter of personal preference, since I am not a huge pickle fan. The second thing I noticed was the texture. There was no surprise that as the bite went on the moist chicken breast would flake, maintaining its crisp, but soft enough to easily chew. The spice, although there, didn’t initially kick up a lot of heat.

As I go on to eat the sandwich, the taste of the pickles starts to balance out, actually adding a tasteful dimension to the sandwich. The subtle sweetness to the buns was brought out in each bite. When biting towards the middle of the sandwich the heat really packed in; the spicy sauce could make anyone sweat, especially in the dead center. However, the mix with the bread and chicken did add a gentle touch to the sauce so even though the heat could be felt, it didn’t feel painful. The chicken was definitely well distributed all throughout the sandwich; there was chicken even at the very end which tends to be mostly bread and sauce. The white meat inside the chicken looked amazing and you could taste the great quality.

How Does It Compare?

Compared to its big Miami competitors such as KFC and Chick-fil-A, their sandwiches just don’t surpass Popeyes’ Spicy Chicken Sandwich. Without compromising quality or integrity in its four simple ingredients the sandwich still packed a punch making it untouchable in the cutthroat world of fast food chicken sandwiches. The chicken itself was fresh and juicy, truly home cooked, and the simple presentation was a definite plus.

Is It Worth the Hype?

Personally, I definitely think so. Although to some it’s not as easily accessible as sandwiches in other fast food chains because of Popeyes’ sheer distance, the quantity and the quality of the chicken is enough for the trip to Popeyes- especially when the sandwich is only $3.99. It is quite a bargain for such a heavenly sandwich.